The Story Behind I Heart New York

Cities, counties and countries all have marketing departments trying to attract tourists, shoppers and businesses, and there are usually adverts and PR drives to accompany each campaign. But few have been injected with the urgency of a desperate attempt to keep New York City in existence in the mid-70s.

As we know, New York City is a thriving metropolis today, and banner of its campaign is one of the most recognised, copied and parodied logos in the world. Here’s a brief history of the “I Love NY” logo, which has graced millions of T-shirts, hats and posters as it approaches its 40th birthday. 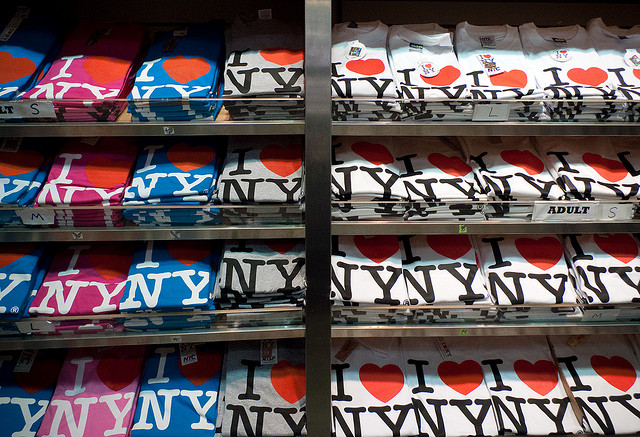 A City in Crisis

It’s hard to believe now, but New York, the city synonymous with the New World, finance, entertainment and the American dream, was on its knees by the mid-1970s. Crime was rife and the police had lost control of many districts. At one point President Ford had threatened to turn off the financial tap and let the city collapse in on itself.

If this wasn’t bad enough in itself, the ripples of bad news were cutting off a crucial source of income for the city – tourism.

The city governors needed a rallying cry, both to boost the morale of New Yorkers and to broadcast the fact that it was a fun, friendly and safe place to visit. So in 1977 they enlisted the help of advertising agency Wells Rich Greene and graphic designer Milton Glaser to work on the campaign. Glaser had already designed the World Trade Center’s Windows on the World complex and had worked with Bob Dylan, among other clients.

From a Doodle in the Back of a Cab …

In a taxi on the way to a meeting for the campaign, Glaser drew a doodle to illustrate the “I Love New York” slogan that had been conceived by the marketers. It was a handwritten N, a heart shape and NY, all in a line. The team apparently loved the idea and asked Glaser to develop it. (The original doodle is now displayed in the Museum of Modern Art.)

Glaser has admitted that his next flash of inspiration could have been subliminally inspired by Robert Indiana’s LOVE design, a pop art masterpiece, which places the four letters in a square, the O slightly askew. But so it was that the familiar stacked I❤NY logo was born. It soon became reproduced everywhere, on T-shirts, mugs, posters and anywhere else that it would fit.

Glaser ❤’d NY so much that he gave his work to the city for free, hoping it would become public property. To this day it still earns $30m a year and the owner, Empire State Development Corporation, tirelessly chases copyright infringements.

The logo is now so entrenched in popular culture that it is endlessly morphed, re-worked, parodied, copied wholesale and occasionally used legitimately, everywhere from the catwalk to the street market. But whether it’s in its original form or with its letters changed, everyone who sees it recognises it as belonging to New York, although most people will associate it only with the City, rather than the intended State and City.

Did the logo drag New York back from the brink? Who knows – it certainly played a part. It was reborn after the 9/11 attacks, as a symbol of both affection and defiance, and shows no sign of going away anytime soon.